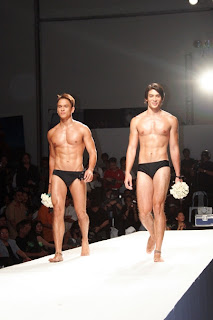 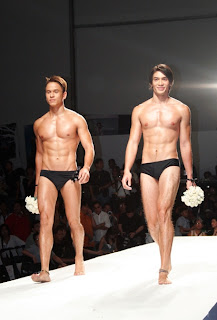 The tales of the two model brothers who made it big in Manila’s fashion runways are quite different. Sons of a [French] preacher man to a Filipina, 23-year old Martin is older and shorter than Luke. The younger one though was the first to enter modeling. Martin later came into the scene by entering the Mossimo Bikini Summit in 2004 [won by Italian model Marco Grazzini] and again in 2005 [runner-up to Tarlac City boy, the Swedish-Filipino Einar Ingebrigsten]. From then on, designers and commercial casters took notice of Martin’s mestizo looks as opposed to Luke’s dark and lusty bearing. And then the pansy-ish Martin, who associated in the company of a gay city councilor in Quezon City with a pink posse, got introduced to one-time-actress-now-councilor Aiko Melendez. After a much-publicized marriage, Martin is now happily maintaining a family with one child, sometimes pinch-hitting for his wife in public occasions. Meanwhile Luke is still hitting the runways and TVCs. Outspoken model Wilma Doesnt lately commented on radio that the model with the biggest appendage is Luke. [Refrain] The only one who could ever reach me Was the son of a preacher man The only boy who could ever teach me Was the son of a preacher man Yes he was, he was, ooh, yes he was (yes he was).

One thought on “Sons of a Preacher Man: The Brothers Jickain”