539,744 spam blocked by Akismet
I couldn’t stop laughing when someone requested pictures of Tom Babauta. Yes that gay icon of a hunk in the 80s, who was imported from Hawaii to star with teenage actress Snooky Serna in Stranger in Paradise, apparently to match the Maricel Soriano-Danni Vanni [another hot import who got famous locally in a TVC mixing his Sarsi cola with egg, for crying out loud!] tandem.
Tom Babauta in local gayspeak means “I’m hungry” apparently a take on gutom [hungry] 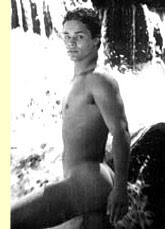 . But in the 80s Tom Babauta was a person, a B-list actor famous for that urban legend about his schlong. For years, nothing much has been heard about Tom. Apparently he was the toast of Manila in 80s showbiz for having, well, a big moa kākala or manu kamaāina. Rumors abound that he was the male model in that big painting in the abandoned Film Center about that naked Filipino in the myth Malakas at Maganda, with Coca Nicolas as the female counterpart.
[To digress a bit, Coca Nicolas was one of the three softdrinks beauties then who lorded it over at the Experimental Cinema of the Philippines. The three, Coca, Pepsi Paloma, and Sarsi Emmanuel starred in the disturbing sexploitation flick Snake Sisters, which was remade years later with Sunshine Cruz as one of the sisters. Snake Sisters told the story of three cloistered and skimpily-clad mountain maidens who competitively fornicate with the visiting lowland hunk, to the point of murder. Plausibly, this movie spawned the Tagalog idiom inahas which meant inagaw as in Inahas mo asawa ko!]