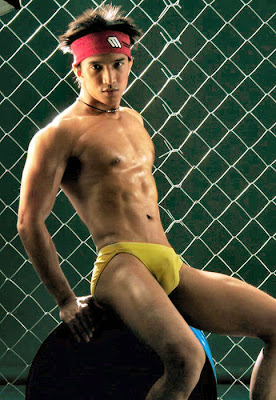 Where in the world is Marlon Morco? UPH [ http://ultimatepinoyhunks.blogspot.com ] and I were wondering whatever happened to this cute chinito guy. Remember him as one of the only two Filipino-looking guys [the other being runner-up DJ Myke Salomon] in the Mossimo Bikini Summit contest in 2004? He stood it out among his batch, which included Filipino half-breeds Martin Jickain, Alec van Dierendonck and foreigners Dane Hutchinson and eventual winner Marco Grazzini. For some reason or the other, I know I have some studio pictures of this guy but I can’t seem to find them. In the meantime, UPH why don’t you hit us with one of those fleshly-filthy first-hand stories about your experience with this guy?