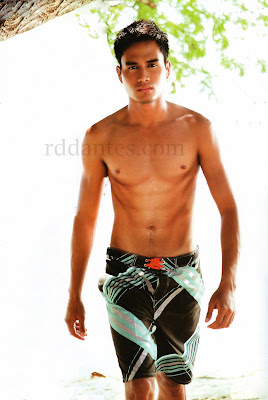 Pretty soon, skin-tight and gauzy Speedos will be in season again. In the meantime, the low-waist board shorts are still favored this summer. Twenty-one-year-old Alvin Jolas Dais still looks hot and sexy in dem shorts. The 5’11”-charmer from Iloilo City was a Cosmopolitan [Phils] magazine bachelor in last year’s list. This summer, he’s one of the magazine’s contestants for “Steamy Studs Online”, wherein the winner [by most votes] gets a slot in the top ten centerfolds later this year. Will you vote for him in the Cosmo site?