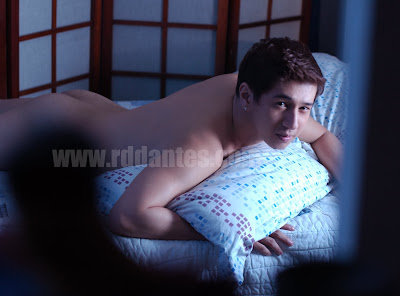 Mainly because he is having a new movie, entitled Kurap [Blink], Sherwin Ordonez is doing the nekkid-guy-in-bed thing, to promote the indie flick about a small-time crook in inner city Manila who falls for a cunning journalist, as their lives spin, spiral towards a tragic ending in a romantically ruthless setting, dark and foreboding, oh, you have to see and feel the movie just so you will know what I’m saying, aside of course, from the visual treat of the boys – nasty, immodest and good-looking all – Dexter Castro, Jeff Luna, Rico Lazaro and this German-Filipino mestizo Christian Burke, plus Mr. Ordonez, who is such a revelation in his first movie outing [and lead role!] and I’m raving and ranting because I’m doubly excited about Mr. Ordonez taking on a serious role, as this movie will be shown uncut at the UP Film Institute on Saturday, November 8 with all the cast and crew in attendance, so I will see you there, too.  Now, if you’ll excuse me, I’ll take a vacation now and won’t be back till Monday.