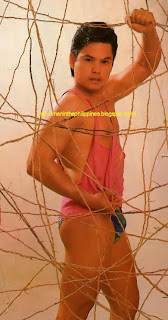 Where in the world is Lorenzo Mara? Launched in the early 90s, together with hunky Richard Go aka Ricardo Cepeda, in Regal Films’ string of campy sexy flicks, Lorenzo “Tata” Mara is still active on tv and in the movies, although in two-bit roles. Lorenzo is the son of that actor who always gets to play the Philippine President in soaps and movies, Lollie Mara. He was last seen in Pamahiin [2007], Mano Po 5 [2006], and Txt [2006].