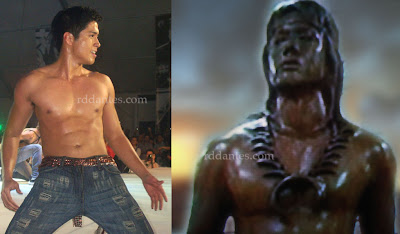 So, this is probably the much-touted wooden statue of the sexy warrior Machete, an iconic figure in sexy movies made in the 90s. This time, it’s a new one – reportedly slashed and sliced by a National Artist for Sculpture. If it looks familiar, it’s probably carved in the image of hunky young actor Aljur Abrenica , who reprises the role of the lustful sculpture-with-a-woody on tv. Now, I wonder if they are also attaching a big penis on the image, similar to those featured in the movies.