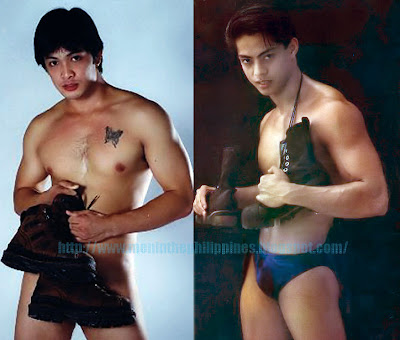 Remember Anton Bernardo, the 90’s sex symbol who worked his way through the sex flicks back then? Well, he is back and raring to tell his story in Japan as an entertainer. Currently, Anton is in the new GMA series Joaquin Bordado, and his resurgence in showbiz comes with his tell-all about his exploits in Nagoya as a bartender. He said he was with Leandro Baldemor, Toffee Calma, Justin Cuyugan, Gerald Madrid and Ralion Alonso in Japan. He also revealed that erstwhile sexy actor Danny Ramos [right photo], duped him into working for Santaro Club [owned by Danny’s rich Japanese wife]. Anton reportedly got less than what was agreed upon for two months work in said club. Nevertheless, Anton is raring to face the cameras again. In fact, he is also in a Viva Digital movie entitled Torotot [Destierro].