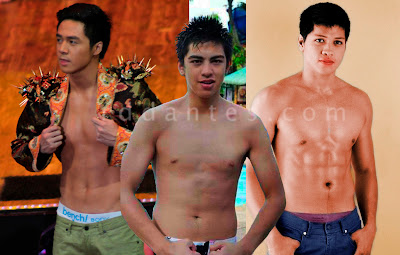 Bright young things. These are the future centerfolds of Cosmopolitan [Phils] magazine. The new leading men of the near course of events. The young hunks gracing Mens Health magazine and shirtless-hunks-on-the-cover pulp. This year they did good: ABS-CBN’s prized singer-actor Sam Concepcion [left] is venturing into hunkingdom come, thanks to exposure at the recent Bench Universe show.  GMA’s teen actor Derrick Monasterio [center] is getting noticed, what with lead status in the station’s afternoon soaps. Check out the December 12, 2012 episode of his fantasy series, Paroa: Ang Kwento ni Mariposa, where Derrick had some under-the-rain-and-in-shorts shots. Promising, really.  And of course, Aljur‘s brother, Avin Abrenica winning TV5’s Artista Academy. His station’s giving him all the shots – shows and soaps with top marquee actors by his side.  Who’s making it big in 2013?

70 thoughts on “The Year That Was: BYTs”