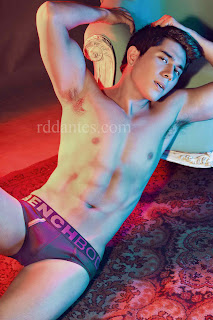 Somehow, the Rafael Rosells and Jon Mullallys have all disappeared from the Bench Body empire of flesh and sex erotica. Time was when they dominated the billboards, print ads and tv commercials for the underwear company. Now, there’s a new guy on the briefs-and-thongs block and his name is Paulo Avelino. Judging from the proliferation of Paulo images in sexy underthings, he’s undeniably the new It Boy of Bench Body!