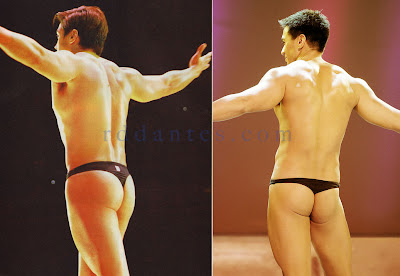 And there he goes again! Thirty-one-year-old actor Wendell Ramos first floored [and scandalized] the Araneta Coliseum audience at the Bench Fever show in 2006 when he appeared on stage with a clenched butt [left photo]. At the Bench Blackout fleshfest in 2008, he played coy and just wore tiny briefs sans rump exposure. Recently, at the Bench Uncut extravaganza, he wore a strand of underwear again, revealing a plump posterior. Of course, he got the most bluster and boom from the crowd that night.