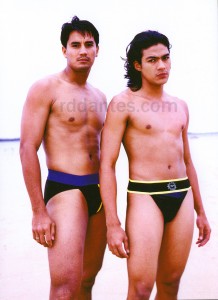 The Grandfather of All Bench Models is actor and failed politician Richard Gomez [left]. As a 20-something fledgling actor, he steered the local brand to such great heights via ads and billboards. When it was time to hand over the reins, he chose another tall, dark and handsome teener by the name of Jomari Yllana [right] who appeared in racier advertisements in magazines and giant billboards around the metro.