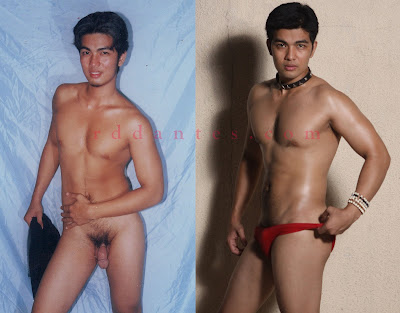 Time changes some things in a man. The size of his hips. The color of his skin. Maybe some growth of little hairs in his body. The breadth of his chest. Throw in a few pounds on the buttocks and the legs. In the early 00s, Christian Medina was a fledgling Bulacan lad who entered a national bikini contest and had his picture taken back stage [left photo]. A year ago, he resurfaced as an indie flick actor in Heavenly Touch, mighty and muscled. His more recent photo is the one on the right, and the improvement shows. He is now trying his luck as an actor in digital films.