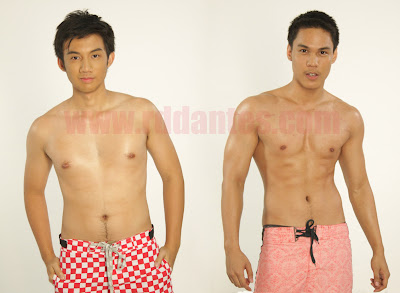 The bright lights lured these good boys from good schools into showbusiness. Nineteen-year-old Mikee Vincent Lee [left] and 20-year-old Fred Payawan were first discovered in ABS-CBN’s Big Brother-Teen Edition in the summer of 2006.  At that time, the boys were still in High School –  Mikee at the Ateneo and Fred at the Colegio San Agustin in Makati City.  Although Mikee was the resident nerd, Fred was the hunky one inside the Big Brother house. Now, the boys are in TV5’s 3rd season of Lipgloss, a teen drama series that airs every Saturday at 6 p.m.   Catch the season premiere on 14 February 2009 on TV5.

17 thoughts on “Mikee and Fred”