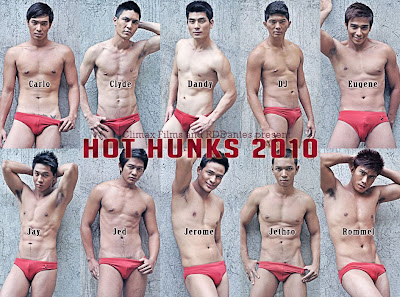 Hot Hunks 2010 is the first installment of BIKINI TV, a groundbreaking semi-reality video series produced by CLIMAX FILMS in cooperation with this site. It is dedicated to bringing the bikini pageant to a wider audience and providing a sexy and interactive experience to its viewers.

For the first time, you get to have a say in who wins a male bikini contest. Just go to your nearest video shop and buy a copy of the DVD. Watch the ten sexy profiles of the candidates and come back to this site to vote for the one you think is the most deserving to win the title of Hot Hunk 2010. After a careful screening process, the final line-up of contestants are: Jerome Santos, Dandy Yap, Clyde Cruz, Carlo Lopez, Eugene Tejada, Jethro Sanchez, DJ Lopez, Rommel Rabida, Jed Rivera and Jay Viernes.

Each DVD has an interactive menu wherein you can choose and watch what actually happens in a bikini pageant. The ten candidates were asked to stay in a private house prior to the contest with cameras monitoring their life within the bikini boot camp—from the first meeting to their recreation time, to their private conversations and even their most private moments in the shower. Witness behind-the-scenes footages of the auditions, the back stage during the bikini show and watch the actual bikini pageant right in the comfort of your television set.

Remember, you can only vote for ONE candidate so make sure you watch the video before picking out your favorite. Don’t base your votes on just the pictures alone. Each hunk has his own unique personality and sex appeal. The video will allow you to get to know the ten contestants more and you might find yourself liking a different candidate than what you expected.

Voting officially starts today and ends on January 31, 2011. The winner will be announced in this site.

Watch the exclusive trailer on You Tube by clicking on this link: http://www.youtube.com/watch?v=m2dkKlZYeVo. UPH did the photo collage above.