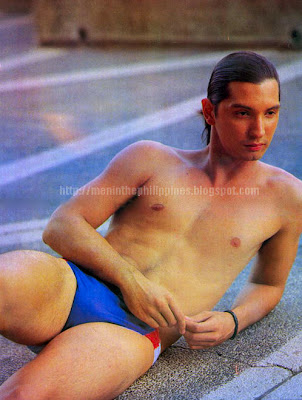 Polished with patrician-boy-next-door looks, Jaime Garchitorena was one of the ultimate 80’s matinee idols as he sang his way to fame via the hit CloseUp toothpaste song “Just A Smile Away.” He was in most Viva Films movies, mostly teenybopper and Andrew E-comedies [watch his video singing, all so suave and cool]. Currently, Jaime Garchitorena is featured in the latest issue of MetroHim magazine, and it turns out, he is now running an IT company and RockEd Philippines. The latter is a movement with the object of “fighting extreme poverty in the country while using music and the arts as vehicles to get the message across.” To do this, “local rock stars and actors are invited to deliver the message via small concerts held in students’ classrooms.” Photo above was taken a decade ago for a movie promo, and Jaime Garchitorena still has the same form today.