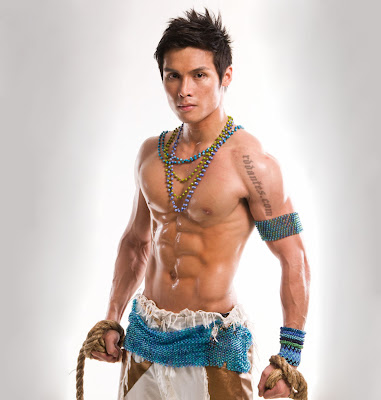 Model-actor Jay Gonzaga is top billing a new production of Orosman at Zafira, one of the best komedyas ever written. The 5’10”-tall hunk [the abs! the abs!] was one of Cosmopolitan [Phils] magazine’s top bachelors for 2009.
Here’s the PR: Dulaang UP is bringing back its blockbuster production of Francisco (Balagtas) Baltazar’s Orosman at Zafira this month. The show will run 4 – 26 February 2011 for a total of 15 performances at the SM Mall of Asia CenterStage.
Considered as one of Balagtas’ best-written works, this production first ran in February 2008 and was re-staged in August 2010 to sold-out, standing-room-only performances at the Wilfrido Ma. Guerrero Theater, UP-Diliman. The contemporary adaptation directed and choreographed by Dexter M. Santos, with original music by Carol Bello, garnered nominations for both Best Musical Production and Best Stage Director at the 21st Aliw Awards. This contemporary adaptation of Balagtas’ text celebrates the uniqueness of Philippine culture through original music and dance. After it closed in 29 August 2010, Dulaang UP continued to receive numerous inquiries and requests from those who failed to catch it and even those who had already seen the show but wanted to watch it again.
Shows are Fridays at 8 pm and Saturdays at 10 am, 3 pm and 8 pm. Tickets available at all SM Cinema ticket booths (call 470-2222) and at TicketWorld – National Bookstore, Robinsons Department Stores, Greenbelt 1, Glorietta 5 and TriNoma cinema ticket booths – (call 891-9999 or visit www.ticketworld.com.ph)