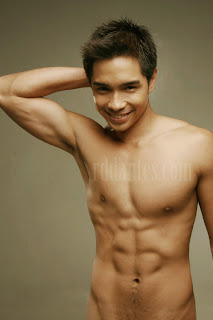 I wonder what JC Tiuseco‘s been up to these days? Perhaps an afternoon soap or some bit parts in a teen show? It seems his pop-meter’s not rising, despite some serious projects given to him by his home station. Maybe, as some are wont to suggest here most often,  he should go the really sexy and daring indie route. Didn’t his older brother star in a gay indie flick a few years back?

46 thoughts on “JC Does Summer”