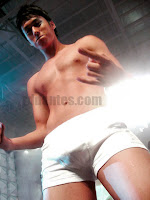 .. his mom, who is sick right now.  Nineteen-year-old Jiro Shirakawa snagged the Mossimo Bikini Summit title just last weekend, edging out the prominent contestants. He hopes that this win will open more doors for him in the modeling world, which is now his bread-and-butter as he has reportedly stopped going to school at the Philippine School of Business Administration [PSBA]. This Japanese-Filipino cutie has been previously featured in top magazines and publications, and has done the major fashion campaigns of Bench, Penshoppe and Mossimo.  He says he wants to concentrate for now in modeling, as he has put school off temporarily.  His mother, who has cancer, has accepted this decision of Jiro.  Showbiz next? We’ll find out soon.

19 thoughts on “Jiro Dedicates Win To…”