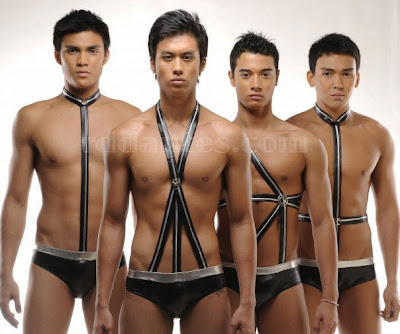 This picture seems odd because apparently this is the official photo of the winners of the 2009 Mossimo Bikini Summit held months back. Of course, the winner – Jiro Shirakawa is in front of the pack. Angelo Cacciatore [second from right], who was declared first runner-up, is right behind Jiro. The second runner-up announced that night was Mark Manicad [rightmost]. And Geron Lontoc [leftmost] is also in the picture, literally and figuratively. Geron was not proclaimed as one of the runners-up during the contest. Reportedly, he was seen bawling back stage after the winners were called, expecting that he will get one of the top prizes. In a post-pageant party held to mark Jiro’s birthday, Geron was subsequently proclaimed by the organizers as the first runner-up. Angelo was not present at that time. So that makes two first runners-up, I think. If you ask me, I’m a bit addled, too.