538,630 spam blocked by Akismet
In other news, former “macho dancer” and now positing himself as a “45-year-old businessman from Quezon City,” Jonathan Garcia a.k.a. Jon Romano was named as the first “Ultimate Kalokalike” of ABS-CBN’s noontime show “It’s Showtime” for his impersonation of actor Christopher de Leon. Jon took home P 300,000.00 as prize money, besting 18 others in the celebrity look-alike contest. And here are his racy pics when he was younger. 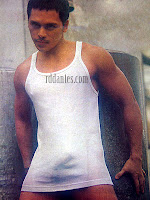