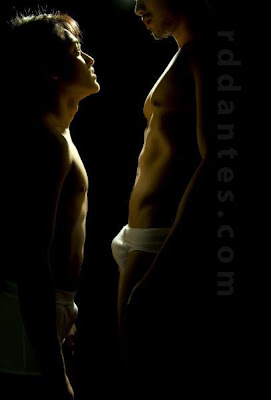 Exactly two years ago today, 4 February 2008, one of the best gay-themed movies had its director’s cut premiere at the University of the Philippines Film Institute. Ang Lihim ni Antonio played to a hushed crowd in a jam-packed theater. The coming-of-age movie [with full emphasis on coming] was shocking and disturbing because of its theme. As one of the hits of the Altarejos-Bonife tandem [Parola], Lihim went on a commercial run on the eve of Valentine’s Day, which date marked the start of a successful movie screening in limited theaters. Photo shows the stars Kenjie Garcia [left] as the young boy enamored with his uncle played by Josh Ivan Morales.