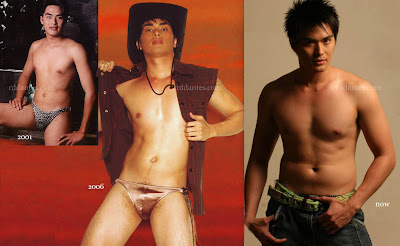 That’s stands for “whatever happened to.” In this post, whatever happened to sexy actor Kris Martinez? In 2001, a then unknown Renato Cris Acosta [inset] from Calumpit, Bulacan joined the Maharlikang Pilipino pageant, a bikini contest. He didn’t win. Someone noticed him and took him to showbiz. In fact, he even roomed in with fellow talents Paulo Avelino and Harry Chua a.k.a. Harry Laurel. After his sexy turn as an exotic dancer [red photo] in the 2006 movie Twilight Dancers, he disappeared from the limelight.