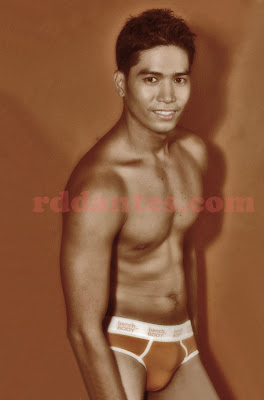 In the olden days, the concept of wearing tight briefs [Yacht Club, Brute or Warren brands] in pictures was confined to the bomba stars, actors who had no qualms wearing tiny undergarments to promote their movies. Now, everyone is fitted in tighty whities [and prints] and the so-called bikini shows now have guys wearing sexy briefs, instead of Speedos and Arenas. Thanks to local brand Bench, which took the underwear business in the late 80s out of the bedroom and into the entirety of fashion, wearing jockeys and intimate things in shows, movies and advertisements [and even profile pictures for social networking sites] is now socially acceptable. And nobody’s complaining! In photo: Jeff Luna – freelance model, indie actor and bikini open regular.