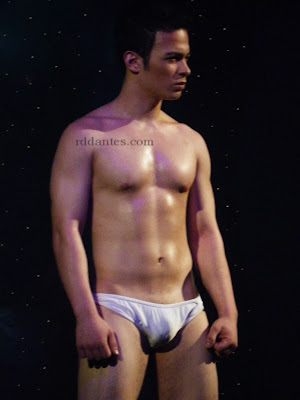 According to Wikipedia, Cameltoe is a slang term that refers to the outline of a human female’s labia majora seen through tight clothes. Male organs showing through clothes at the crotch may be called moose knuckle or caMaletoe. Cameltoe commonly occurs as a result of wearing tight fitting clothes, such as jeans, shorts, hotpants or swimwear. Due to a combination of anatomical factors, the snugness of the fabric in the region surrounding the cleft of venus may result in the area of the crotch taking on the appearance of the forefoot of a camel. In photo, for example: Joseph Boustani, 5’8″ tall, 21 year-old Filipino-Lebanese, born and raised in the U.S. and now here in Manila doing ramp and tv commercial modeling.