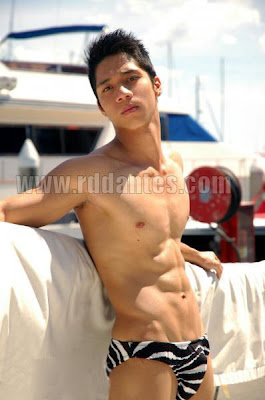 Hot, hot, hot! That’s Robby Cubacub under the summer sun. And although the heat’s turned up high, 5’10”-tall Robby is still solid and stiff, er, stable in midday fun. A native of Porac, Pampanga, Robby has been in a few bikini contests lately, such as the Mr. Sexy Body 2009 contest of Sta. Lucia East Grand Mall. Although he didn’t win, Robby’s planning to be visible in this summer’s hodge-podge of underthings-and-thongs competitions. With the sexy mien and well-sculpted bod [plus a scandalous swelling!] he’ll surely win one of those contests pretty soon.