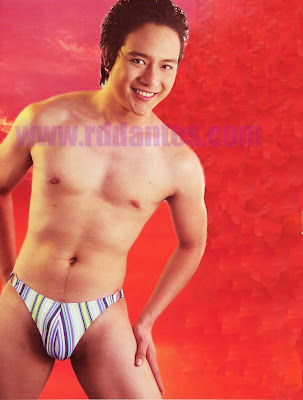 Ah, the many different faces of Jude Marco Sy-pongco! Here’s one taken four years ago, back when he was only twenty years old and competing at the 2004 Mr. & Ms. Bikini International Philippines. That time he was up against the likes of pro models Carlos Concepcion, Guiness Nabung and his bestest friend Miggs Espina, Bembol Cabasal, Verlyn Hizon and Jadel Lee. And then the more daring ones like dick-a-day featured guys Randolph Dungo and Cherroy Curamen, plus porn flick lead Marko Maristela were also in the contest. It was a big group of guys, actually. Some became quite famous. Some went on to become bit players in the movies. Some just dropped their briefs for posterity. Although Jude Marco didn’t win at that time, he is surely winning them over now in Macau!