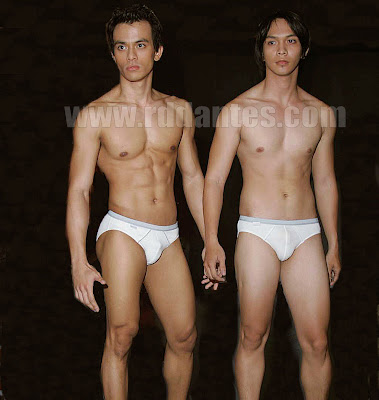 No, they’re not holding hands, but these two guys look hot together in their tighty-whities. Alfredo “Jun” Danganan [left] and Silver Morres are two of the more senior models who have been in and out of those bikinis-and-speedos contests in the past few summers. Jun Danganan has gone through a lot of those competitions, from Kouros 2006 to Slimmers World Great Bodies 2007 to Mr. Philippines-Universe 2007. On the other hand, 26-year-old Silver Morres has participated in small-scale bikini open contests, and hopes to go major in the future. Both guys have already done runway shows for designers and commercial products.

7 thoughts on “Jun and Silver”