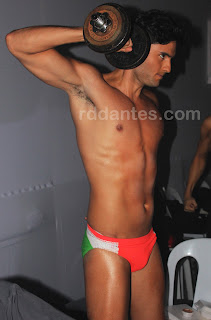 Well, whaddya know? This is Costa Rican model-in-town Juan Pablo Brenes Mendieta. The 24-year-old model has appeared in prime runway projects in town such as the Bench shows of late, the Philippine Fashion Week series, and the Cosmopolitan [Phils] magazine’s annual Bachelor Bash. A lawyer in his native state, the 6’1″-tall hunk has since given up the legal briefs in favor of the sexy, size-under briefs in the Philippines.