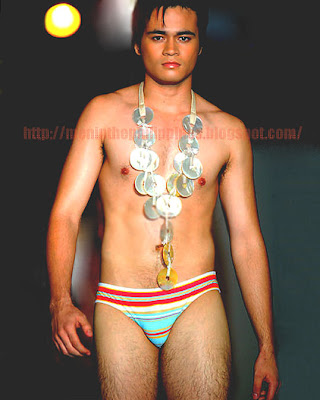 Geoffrey Taylor was a former model who made waves at the Pinoy Dream Academy reality show last year. The 21-year-old native of Tuguegarao, Cagayan Valley was a finalist at the 2006 Mossimo Bikini Summit [won byJerome Ortiz with runner-up Hermann Weber]. Many thought that his entry into the Dream Academy show would pave the way for this budding singer, what with his height [5’11” tall] and looks [his father is American]. Unfortunately, he was eliminated during the contest and not much happened to him, except for minor gigs in concerts. He was last seen at the major concert of one of the PDA runners-up last week, where he reportedly got P10,000.00 gratuitously from an admiring gay fan in the audience.