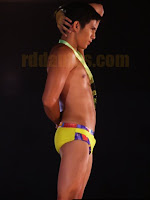 It turns out the single post about the freshman and the bikini candidates are interconnected.  Mossimo Bikini Summit 2009 castoff and former Starstruck contestant Dex Quindoza is now part of the new singing group called YM [Young Men].  And guess who’s with him in the motley bunch? The freshman Andrew Miguel and the stud boy Edgar Allan Guzman . The title of their new album under Ivory Records is I-YM Mo Ako!  I’m not so sure though, if this is another one of those group of sexy boys singing. But I’m not complaining.  Expect to see more publicity photos of that Andrew Miguel guy and Edgar Allan and of course, Dexter as they promote their new group.  By the way, if Edgar Allan was the Mr. Pogi 2006 winner in the noontime show Eat Bulaga, Andrew Miguel claims to be the first runner-up in said contest [year unspecified].