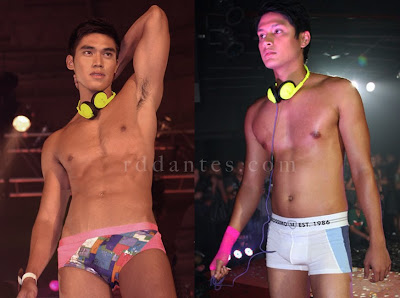 The cute Mossimo underwear models are JR Tirona [left] and Bjorn Aguilar. Twenty-two-year-old JR was one of the finalists in last year’s Mossimo Bikini Summit. Unfortunately, the 5’11”-tall model from Quezon City failed to win the top prize. However, his stint in said contest paved the way for more projects in the fashion runways and shoots in the metro. On the other hand, 25-year-old Bjorn competed in the Body Shots Model Search held a couple of years ago. He nearly made it and he surely got noticed as he was cast in major shows for top designers and fashion editorials. The 5’10”-tall hunk from Manila was also in the Cosmopolitan [Phils] bachelors list two years ago.