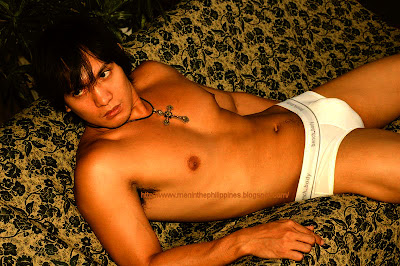 Christian Navesis was last seen in the movie Twilight Dancers, as one of the bump and grinders with too much derring-do. Christian Navesis, who lists his birthdate on December 19, 1985 [which makes him all of 21 years only!], was born in Cebu City. He has appeared in countless male personality searches, from Mr. Caloocan 2006 to Kouros Male Model Search to the bikini contests in the resort provinces. The freelance actor and model, who stands at 5’9.5″, has also modeled swimwear, resort wear and bikinis for the usual runway shows of the underwear designers. [Thanks to Chris L., from France, for the topmost photo].