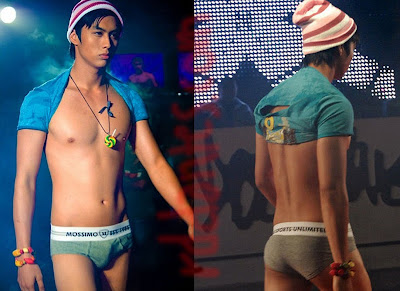 So I found this picture of Mossimo Bikini Summit 2009 winner Jiro Shirakawa when he was doing this Mossimo fashion show as just one of ’em models in tight jockeys, and I guess I’ll just have to share it because it’s pretty interesting what and how size-under briefs can do to the curves and contours of Jiro’s fine body, which is really his passport to fame, next to his cute face, and last I heard he is doing acting workshops for ABS-CBN [remember he confirmed his foothold on the giant network by showing up as one of the starlets in the annual glitzy ball held recently] in preparation for the revival of the 90s hit teen show, Gimik. Or something like that.