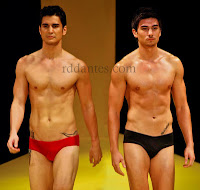 Red or black, who’s your fancy. Mr. Red is John Daryl Rose, who has been in the industry for so long. He has since adjusted to a better bod, after that f-a-t episode in Cosmo Bash a few years ago.  Of course, he looks hotter now.  Mr. Black is Charlie Sutcliffe, who is  relatively new to modeling. He has since appeared in prime spots on the runways and in tv ads.  Who’s your choice?

47 thoughts on “Red and Black”