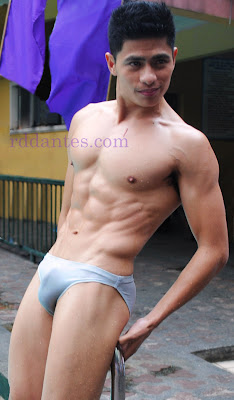 In 2007, then 23-year-old Alexander Rico from Baguio City won the Mr. Talent prize at the Mr. World-Philippines contest, a national pageant held to select the country’s representative to the Mr. World competition in China. In 2008, the 5’10”-tall model busied himself with work as a stylist and makeup artist. He did the makeup of Johnron Tanada and that Izon guy in the movie Love Birds. In 2009, he decided to hit the gym and do the roids. In 2010, he won the year’s Ginoong Pilipinas national pageant – primped, primed and pumped up. Oh wait, that’s just my dope. The national finals is yet to be held tomorrow, 26 May 2010 at the Metro Bar along West Avenue, Quezon City.