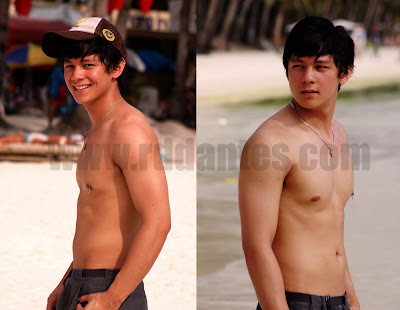 Commercial model Joseph Marco is our featured guy for today, and although he’s not in the regulation Speedos most common in photos here, he sure looks sexy and fresh in the images above [taken in Boracay Island last summer – during the Holy Week].  Twenty-year-old Joseph has German and Spanish blood from his mother’s side.  He was discovered by an agent in a mall immediately after graduation from high school.  The 5’9″-tall native of Binangonan has appeared in big commercials such as Coke, Head & Shoulders, E-Aji Dip Snax and Downy. Eventually, he was signed by GMA as an exclusive talent.