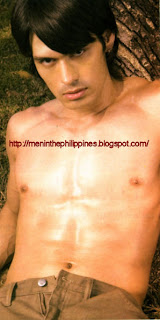 [l-r: Victor Basa, Rocky Salumbides, Bruce Quebral]
During dinner, my friend UPH, who has finally put up his site [ http://www.ultimatepinoyhunks.net] after the Ram Sagad saga, was diss-cussing with me recently how some D-list models classify themselves, conceitedly, as “Class A.” The subject matter came about after UPH recalled how one wannabe model [D.] he purposely met suddenly self-proclaimed that he is a Class A model, together with A., G., and a host of others I could only tick from the back of my mind’s D-list. And then again, I do not even remember the bigger-league male mannequins calling themselves “Class A models.” They are simply called models. Top models.

Finally, it dawned into smart aleck UPH that in Greenhills Shopping Center, home of the counterfeit goods, the vendors classify their wares from Class A imitation to Class D crock. Say, for example, there is a Class A Rolex in Greenhills – which means that it is a precise replica, but still a replica; the Class D would be crass-fake big-time. And it all made sense.

And so, we finally understood what that wannabe model was saying all along. Since they cannot go a bit higher and join the ranks of the Iagos, Victors and Dereks and all the models shown above [representing a select few of the top male mannequins], the Daves, Alizons, Guinesses and a multitude of others go a step nearer and call themselves respectably as “Class A models.”