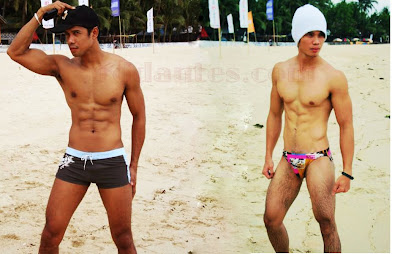 Two guys on an Ilocos beach. Both are sexy and oozing with appeal. The one on the left is Richard Lopez, a familiar face in the contest circuit. He’s gone from the bold and daring Valentino Cover Boy search [where he won as third runner-up] to the Ginoong Pilipinas 2007 pageant, all with relative ease and skimpiness of the you-know-what. The guy on the right is Marco Posadas, a regular too in bikini competitions. He competed at the recently-held Hataw Super Bodies 2009. He, unfortunately, lost.