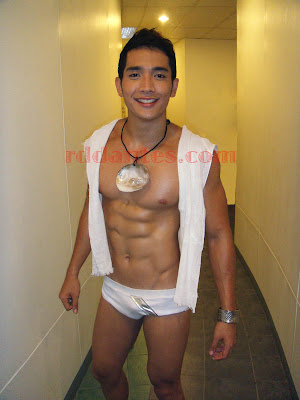 One of the guys who was inexplicably shut out of the winners’ circle at the recently-concluded Mossimo Bikini Summit 2009 was Kevin John Zaldarriaga. The 5’11”-tall hunk was a favorite in the contest because of his well-proportioned, muscled body. Unfortunately, he didn’t win any of the major awards. Twenty-one-year-old Kevin John is from Bacolod City and has been modeling for quite some time in the southern city prior to moving to Manila for more opportunities. He is a Nursing graduate at the St. La Salle Integrated School in Bacolod City.