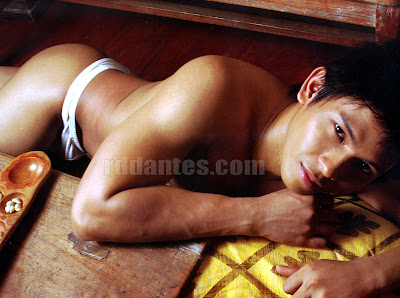 I watched the indie movie Kamoteng Kahoy, and Orlando Sol was in it as a bit player. He played one of the street punks, and he is dark, muscled and sexy in a sweaty-greasy way.  I just hope he’ll go daring and bold next time as a screen stud.  Speaking of studs, the movie got me entertained not because of the screenplay but because of the male actors comprising the cast. Obviously it was a reunion of sorts for the director’s wards, who were the studs in 90s soft-porn flicks from Anton Bernardo to Gerald Madrid. Most of them got fat and lost some teeth, but some are still hot [e.g. Dante Gomez].