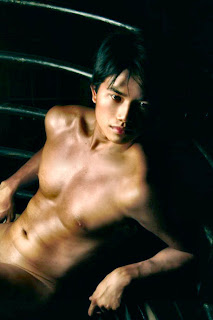 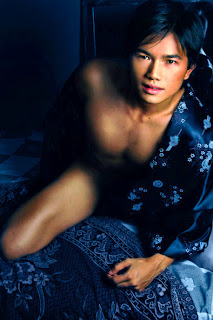 As if we could never get enough of Harrison Chua aka Harry Laurel of the Men of Provoq, reader harrychuachika sends once again these wonderful images of Provoq’s main boy to my email [Thanks]. Harry, who starred in the movie Ang Lalake sa Parola, reportedly [I didn’t get to see the premiere at the UP Film Institute] flashed the family jewels a few times in the said flick. Yet, initial reports from the Movie and Television Review and Classification Board [MTRCB] revealed that upon first review, Parola got an X rating [not suitable for public exhibition]. The movie is slated for commercial release at Robinsons Galleria IndieSine on September 19 and the producers are apparently on the cutting room floor to submit the movie once again for the 5-man second review committee of the MTRCB. If the movie gets disapproved again, in its entirety, the movie will have to be appealed to the Office of the President. That means, the movie is on an uphill battle with the MTRCB to preserve the director’s cut. The regular showing of Parola would have to be tamer since the MTRCB found it, upon first review, not suitable for public exhibition because “[t]he work depicts in a patently lewd, offensive, or demeaning manner, excretory functions and sexual conduct such as sexual intercourse, masturbation and exhibition of the genitals.” Darn, I missed the premiere. [Photo credits: Niccolo Cosme]