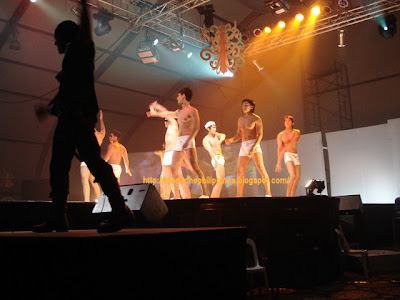 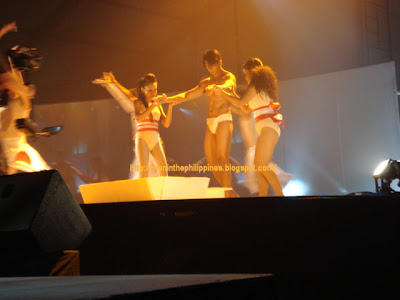 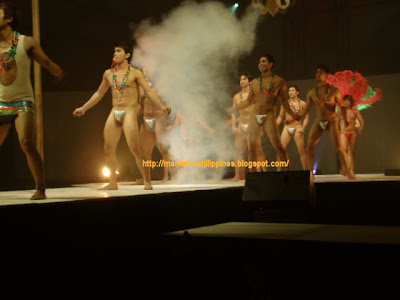 My gratitude to mean girl Barbarella who sent these photos of the show Cruise – The Provocative Tour. First photo would have to be the opening sequence where the boys are just about to peel off their white hot pants to show their flesh-colored G strings. Frisky Niko is the best dancer in the lot, and handsome Harry looked nervous and awkward, which unwittingly added to his charm. Middle photo is the Japanese Yakuza scene with Anthony, before Harry and Justin made a scene when their fundoshi were also stripped by the girls. Last scene is the Fat Tuesday Carnival in Rio, with the boys in shiny shimmering string [bikini] splendor. Later, they went down the audience area to invite the people up the stage. The scenes of the show were videotaped, which will soon be released as the second Men of Provoq video. Of course, the most memorable scenes would have to be Justin’s near-miss wardrobe-malfunction episode, Niko’s monkey bar antics – in a string bikini, Chester’s butt-crack sequence, and Harry, just one stunning Harry performing on stage. Details of the video release will be announced here soon.

One thought on “Scenes from a Cruise”