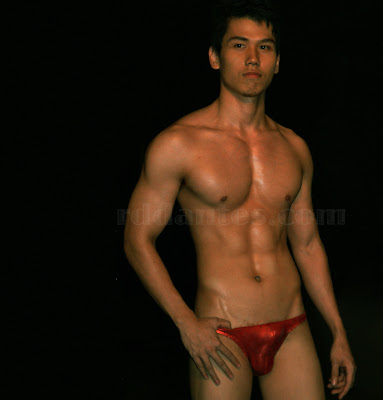 What’s a Catholic school boy doing in a little red bikini? Beats me, but I’m not complaining. It’s Raph Almeda, a 22-year-old student of Architecture from the University of Santo Tomas. If he looks familiar, that’s because he has gone around the bikini pageant circuit from Mr. Sexy Body 2008 [won by Arvin Macu] of Sta. Lucia East Grand Mall to Body Shots 2008. He eventually won the 2008 Summer Bodies competition. He got busy, too, with modeling for the A-list designers and brands on the runway plus stints at the Cosmopolitan [Phils] magazine’s annual Bachelors Bash.