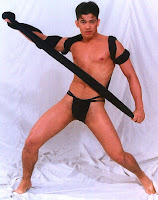 Remember the other two brothers that composed the sibling triumvirate of strippers who blazed through the gay bars some time back? [Shades of the Rockland brothers, although they have not done gay movies and all of them are straight supposedly]. I featured Paul earlier [see recent posts] in rather tame studio shots. Photos above are of younger brother Jay who was initially the more daring one as he came out with a series of pictures in his birthday suit prior to posing with his brothers. The ones below are of Denmark, the youngest [and probably the longest] among the three. Relatively new, he came into the scene when his brothers were already established in the biz. The photos [except the first two above] are hazy – as they were meant to be that way – and taken from the bookazine Rice.

7 thoughts on “The Other Brothers Guesande”