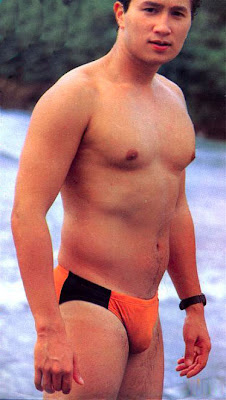 …I had the biggest crush on Enrico Quizon. Eric first came to the spotlight as the Comedy King’s model son in the first models-only Bodyshots contest [sponsored by the Fashion Designers Association of the Philippines ] in 1986. Although Eric did not win the prize [which went to Leo Rabago in the professional division, and Bernard Navarro in the amateur division ], he went on to get offers in modeling stints and movie projects. He had a nice bod at that time, and his speedo pics can attest to that. So, when I was small and too young to understand, I had the ultimate fool’s paradise in the person of this guy. I met Eric when I was already of age, and legally cognizant of matters, affairs, intercourse and annals of life. He is now the director of GMA-7’s adventure series, Asian Treasures.

3 thoughts on “When I was small, and too young to understand…”