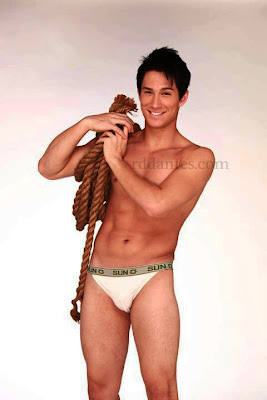 Finally, after two years, Sunjoy underwear is using the images of occasional actor and reality show veteran Ian Batherson in its ads. The sexy Filipino-German guy is seen in various stages of undress in the ads that advertise the briefs famous for their “seamless construction” and “garterless waistband.”

When Sunjoy got Ian’s services, they put out this PR: Sunjoy Underwear, one of the country’s most formidable male underwear brands since the 1980s, signed a contract with Ian Batherson as its newest image model. Batherson was singled out by Sunjoy for it believes in Batherson’s refreshingly good Caucasian looks that truly typifies what a young man on-the-rise should be. With a well-chiseled body and flawlessly good-looking face, Batherson is surely a two-thumb up winner in the underwear category.