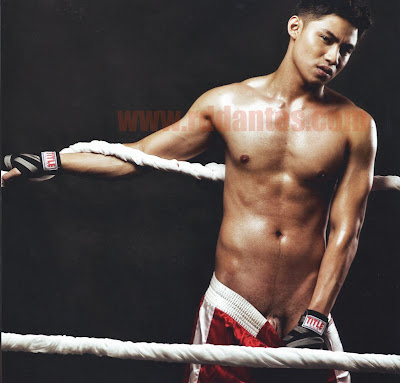 Bronze skinned actor and singer Will Sandejas is doing an independently-produced movie entitled Oliver, about the life of a famous gay bar personality.  I’m wondering if this is a remake or a retelling of the 1983 internationally-acclaimed movie of the same title by Nick de Ocampo, which film detailed the life of a sex worker who inserts a stick of thread up his anus and simulates a spider weaving a web on stage. Just the same, Will Sandejas – so the report goes from an insider in the production – will have lots of gutsy-gritty scenes, e.g. frontal, in the movie, which also includes Jam Melendez and Marvin Yap, whoever they are.  This one’s set for release early 2009.  Photo from Climax [No. 2] magazine.

22 thoughts on “Will Sandejas, fearless.”