Santuaryo. After the successful run of Bayaw, Climax Films is putting out once again a sexy flick featuring the bestest boys you see regularly in bikini competitions. The title of the movie is Santuaryo [Sanctuary], which is about “Six boys. Trapped on an island. Anything can happen.” Get the drift? The boys are [left-right]: Basti Romero, Gino Quintana, Nicos Bacani, Justin Dizon, AJ Ona and Ralph Mateo. The movie is directed by the controversial Monti Parungao of Sagwan. Watch out for announcements on the start of the commercial showing of Santuaryo in March. The teaser trailer is here. 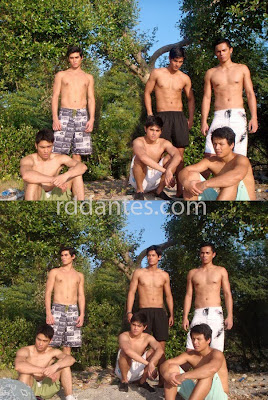 D’ Survivors. Astral Productions is coming out with a new movie featuring the top male models you see regularly in print ads and on the runways. The title of the movie is D’ Survivors, which is about “male models lost and bored in an island after a plane crash.” The stars of the movie are: [standing, l-r] – Fabinho Ide, Daniel Matsunaga and Rocky Salumbides, [seated, l-r] – Don Mendoza, Lemuelle Pelayo and Kerbie Zamora. Not in the pictures is Alizon Andres a.k.a. Jubail Andres, who is also part of the models ensemble. D’ Survivors is under the direction of Adolfo Alix, Jr. of Daybreak. It will be shown in March in selected theaters.